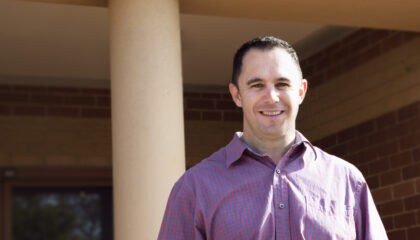 The opportunity to join Mineral Resources (MRL) was too good to pass up for Senior Project Manager Ryan Davies.

After 11 years at his previous role on site in the Pilbara it was time for a fresh start, and MRL presented the perfect opportunity to be part of a company on the rise.

While it’s still early days, Ryan is looking forward to getting stuck into his new role which will involve delivering civil construction and earthworks for a major iron ore project.

“MRL has a great business model and the attraction for me at MRL is the build, own, operate approach. It’s a role with a lot of potential, which is really exciting,” he said.

For this project, our own operations are our client, it’s all in-house and we’re all on the same team. There’s an opportunity here to own your results – from the start of a project through to completion.
Living in Perth’s Northern suburbs, our imminent move to a new, state-of-the-art head office in Osborne Park also holds significant appeal.

“I’ll be in the gym every morning and drinking all the good coffee!” he said.

In a career that has taken him from South Africa to the UK, Dubai and then Perth, Ryan said there was no place he’d rather be.

“Perth is by far the best place ever – the people, the weather, the lifestyle, everything about it is just perfect.”

Pave your road to success with Mineral Resources

Our people are key to achieving our vision to be recognised as one of the great Australian companies.

When you join Mineral Resources, you join a company that continues to grow on the back of its entrepreneurial spirit with a willingness that encourages people to challenge the status quo and explore new opportunities.

Your road to MRL could be a permanent, project or fixed-term opportunity across our various operations or customer sites.